I reported a reCAPTCHA bypass to Google in late January. The bypass required the web application using reCAPTCHA to craft the request to /recaptcha/api/siteverify in an insecure way; but when this situation occurred the attacker was able to bypass the protection every time. The security issue was fixed “upstream” at Google’s reCAPTCHA API and no modifications are required to your web applications.

reCAPTCHA is a Google service that allows web application developers to add a CAPTCHA to their site with minimal effort. reCAPTCHA is a complex beast with a lot of use cases: sometimes it will trust you based on your existing cookies, sometimes it will require you to solve multiple challenges. The following introduction is for the use case where the vulnerability was found.

When the web application wants to challenge the user, Google provides an image set and uses JavaScript code to show them in the browser as follows: 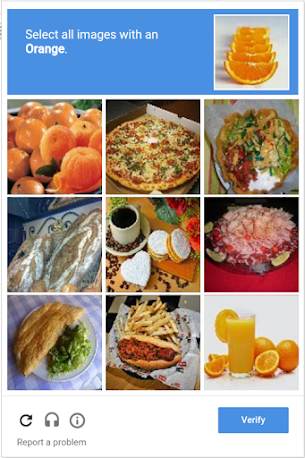 The user solves the CAPTCHA and clicks “Verify”, which will trigger an HTTP request to the web application. This HTTP request will look like:

The application needs to verify the user’s response with a request to Google’s reCAPTCHA API:

The application needs to authenticate itself using {application-secret}, and sends {reCAPTCHA-generated-hash} to the API to query the response. If the user answered correctly the API will yield:

Which will be received by the web application, processed, and most likely result in the user being granted access to the resource.

HTTP parameter pollution is almost everywhere: client-side and server-side, and the associated risk depends greatly on the context. In some specific cases it could lead to huge data breach, but in most cases it is a low risk finding.

The reCAPTCHA bypass requires an HTTP parameter pollution in the web application. This requirement greatly reduced the severity of this vulnerability report when triaged by Google.

An example vulnerable web application would look like this:

Where string concatenation is used to build the *url* variable.

It is also important to notice that on Google’s side, it was possible to send these two HTTP requests and get the same response:

The reCAPTCHA API always used the first secret parameter on the request and ignored the second one. This is not a vulnerability, but was used in the exploit.

Last piece of the puzzle

Web developers need to test their applications in an automated way, with that goal Google provided an easy way to “disable” reCAPTCHA’s verification in staging environments. This is well documented and explained in the documentation, to sum it up, if you want to disable reCAPTCHA verification please use the hard-coded site and secret key shown below:

Putting it all together

Now that we have all the ingredients, let’s take a look at the exploit:

If the application was vulnerable to HTTP parameter pollution AND the URL was constructed by appending the response parameter before the secret then an attacker was able to bypass the reCAPTCHA verification.

Note that I’m sending a specially crafted response to the vulnerable web application, which contains:

When the attack requirements are met, the following HTTP request is sent by the web application to the reCAPTCHA API:

Which will be processed by the web application and the attacker will be granted access.

Google decided to fix this issue in their REST API, and I believe it was a wise move. Their fix is simple: If the HTTP request to /recaptcha/api/siteverify contains two parameters with the same name, then return an error.

Fixing it this way they are protecting the applications which are vulnerable to the HTTP Parameter Pollution and the reCAPTCHA bypass, without requiring them to apply any patches: awesome!

There are two strong requirements for this vulnerability to be exploitable in a web application, first, the application needs to have an HTTP parameter pollution vulnerability in the reCAPTCHA url creation: Github searches showed that ~60% of the integrations with reCAPTCHA are vulnerable.

Second, the vulnerable web application needs to create the URL with the response parameter first, and then the secret: “response=…&secret=…”. Strangely, almost all applications use “secret=…&response=…”. My guess is that Google’s documentation and code examples did it like that, and others simply copied the format. Google got lucky there… if they would have done it the other way around, this vulnerability would have affected even more sites. GitHub searches showed that only 5 to 10% of the reCAPTCHA implementations meet this requirement.

So, if I would have wanted to exploit this in the wild, only ~3% of the sites which use reCAPTCHA would have been vulnerable: not bad since this is used everywhere… but small compared to other vulnerabilities.